Festivals of Punjab You Must Experience

Festivals of Punjab You Must Experience 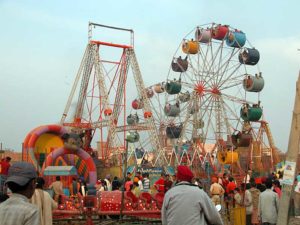 Holi is one of the most famous festivals of Punjab. The Sikh community of Punjab celebrates the 'festival of colours'. In the state of Punjab, this festival is popularly known as 'Hola Mohalla' and is celebrated one day after the festival of Holi. The festival also provides him with the opportunity to showcase his martial arts, especially 'wrestling'. Fun is also defined in various forms in the festivals here. The festival is held at Anandpur Sahib and is a tradition that started in the 1700s by Guru Govind Singh. The festival is marked by sports such as archery, horse riding, fencing, etc.

One of the most important festivals of Punjab is the festival of Baisakhi, which is celebrated as the New Year in the first days of April or May according to the Saka calendar. It is considered to be one of the largest harvest festivals in the North-Western region. On this special day, the tenth Sikh Guru, known as Guru Gobind Singh, founded the Khalsa in the year 1699. On this day, Sikhs go to gurdwaras and listen to kirtan. After the religious rites and traditions are over, sweet semolina is served to the general public. The ceremony concludes with a 'langar' or community lunch. Mock duets and bands form part of the procession playing religious melodies. This festival is also marked as the last chance to rest before beginning the harvesting of corn.

Lohri is celebrated in the state of Punjab just before the day of Makar Sankranti and is one of the most famous festivals in Punjab. The festival of Lohri is a very special festival for the community of Punjabis. This auspicious and joyous festival celebrates fertility and the spark of life. Religious rites and traditions are celebrated with great devotion. All the locals gather sweets, puffed rice, and popcorn among the flames to throw the bonfire. They involve themselves in the Mahfil by singing songs and exchanging greetings. The first Lohri of a newly married bride and newborn child is extremely important.

The festival of Maghi falls exactly one day after the festival of Lohri and is very popular with the entire Sikh community. The locals go for a holy bath and give a lot to charity. Special recipes for this festival include kheer cooked in sugarcane juice. This festival commemorates the heroic battle of Chali Mukte or 40 Liberated Ones who sacrificed their lives to save the life of Guru Gobind Singh. In many areas of the state, fairs are celebrated with much color and enthusiasm.

Diwali is one of the most special festivals in Punjab. Diwali is a time of joy and hope for a bright future in this state. People of all communities participate in this festival to make it grand. In this festival, lighting the lamp symbolizes peace, health, love, and attainment of knowledge. Cattle are raised and worshipped in remote villages of the state as they are their main source of livelihood. The festival also includes the birth anniversary of Guru Hargobind Ji, who was released from the prison of Gwalior Fort.

This festival is celebrated by Sikhs to commemorate their gurus. There are 2 major guruparvas held throughout the year. The first Guruparva is held in the month of Kartika or in October or November to commemorate the teachings of the promoter of Sikhism. The second Guruparva is held in the month of Pusa or in December / January to commemorate the birth of Guru Govind Singh. These days the Guru Granth Sahib is taken out in a procession in which the locals take part with great enthusiasm. The martyrdom of Guru Tegh Bahadur and Guru Arjun Dev is also observed on both days of this special festival. Non-stop religious discourse and recitation of texts are conducted. Free food is known as 'Langar' is also served to rich and poor alike.

This festival is celebrated in the month of Kartika according to the Hindu calendar or in October/November according to the English calendar. Mahila-Lok applied saffron and rice grains to her brother's forehead to remove evils from her life. They also dress well to perform auspicious celebrations. Feeding homemade sweets to their brothers, they also sing and pray for their longevity and prosperity. In return, the brothers also give them some gifts or money as a token of love and affection.

This festival is celebrated on “Sawan Sudi''. It is celebrated to welcome the monsoon season and is one of the popular festivals of Punjab. After the first shower of the rainy season, a small insect called Teej in the state of Punjab emerges from the soil of the earth. On this day all girls are employed in household chores as they apply mehndi on their hands and feet. They also receive new clothes from their parents. The puja or puja is done early in the morning and the 'baya', which consists of various meals, is kept at the place of worship. A decorated 'Chowk' or square is also placed there and a statue or picture of Goddess Parvati is installed. Various cultural performances are held exclusively for the evening.

This festival is celebrated with much fanfare and enthusiasm throughout the country in January/February according to the English calendar in Punjab. In this state, Basant Panchami is celebrated to welcome the dead of the winter season and the spring after decay. The scent of yellow mustard flowers makes Punjabis tremble. People welcome change and celebrate this joyous festival with great joy and enthusiasm. They indulge themselves fully in the festive mood by wearing yellow clothes and giving sumptuous feasts. The main attraction of this festival is kite flying.