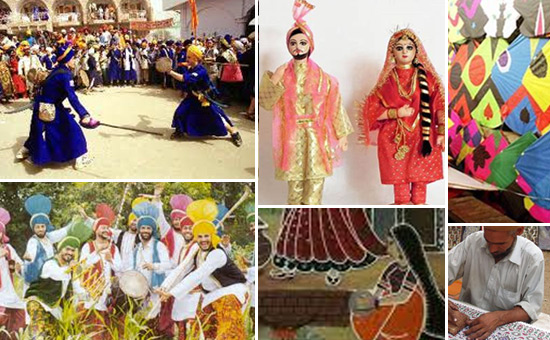 Punjab is known for its rich traditional folk dance & music across the world. You can't separate Punjabis from their Folk dance & music. There are a plethora of folk dances that have been found across Punjab including Bhangra, Gidda which are immensely popular amongst all dance forms of Punjabi Folk dance. The exuberance & enthusiasm of the Punjabi people is strongly displayed in their folk dance. The rhythm of Dhol and Punjabi Music will compel you to tap your feet.

So today let's discuss some famous Folk dances of Punjab.

If you have ever been to Punjab or not, you must have heard about Bhangra. Bhangra is the most famous dance form in Punjab and across the world. Wherever Punjabi's reside they have carried their trademark dancing style with them. Bhangra is one of the oldest & most traditional Punjabi dance forms originated in the Majha area of Punjab.

It is also a popular dance form among the women of Punjab. This dance form is derived from the ancient dance form regarded as ring dance. It displays the vigour and vitality of Punjabi's women. It is an immensely colourful dance form where a group of women wear colour traditional Punjabi dresses and dance together. While performing the Giddha "Boli" or " Boliya" is being sung to utilize emotions.

It is also being performed by the women of Punjab. While performing this dance form women wear colourful clothes such as Kurta and Lehenga. This dance form is popular in the Sandalbar area of Punjab, Pakistan.

It is an immensely popular dance form of Punjab which two young girls perform while holding each other's hands and twirling. They sing the song while performing this dance.

The meaning of Jaago is waking up. This dance form is usually performed at weddings in Punjab. A group of girls dances through the street while carrying a pot decorated with lightened candles and singing Jaagu songs. The songs are full of fun, mockery, and are based on social issues.

Gatka dance is also hugely popular across Punjab. This dance form has elements of martial arts and it requires a lot of training to perform this dance form. Two guys, each carrying colourful staves, dance around each other in unison with the drums and tap their sticks together.