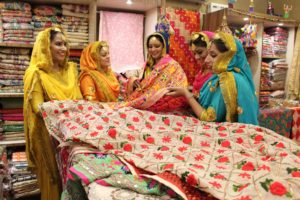 Folk songs, dance fairs, and festivals of love and war, dance, music, and literature are the characteristics of the cultural life of this state. Punjabi literature has its origins in the mystic and religious couplets of the 13th-century Muslim Sufi saint Sheikh Farid and the founder of the 15th-16th century Sikh Panth, Guru Nanak. Dance and song require a lot of entertainment during festivals and celebrations. “Bhangra” and “Gidda” are folk dances of Punjab. With a vigorous screenplay by “Dholak in “Bhangra”, people dance enthusiastically to the tunes of music. It also has other forms, such as jhumar, dhankara, and gatka. Besides, “Gidda” is an important practice played by Punjabi women with “bolis”.

Folk music includes simple instruments such as dholak and dhol drum. “Bhangra” music is popular in Punjab and “Bolis” are sung by Punjabi women. Punjabi songs are very melodious with emotional melodies. The traditional dress of men in Punjab is kurta-pyjama with turban and women wear lehenga-kurta as their traditional dress along with Patiala suit. However, the younger generation prefers fashionable dresses according to the fashion scenario.

There is a collection of colours in turban and dupatta. The dupatta worn by women is known as "Phulkari" and men's turban includes various types such as the patka, the pagri, the Kaski turban, and the dhamla. Wearing a turban is its style and is compulsory for all Sikhs.

Punjabi is famous for its extreme interest in arts and crafts. Punjab is described as an arts and crafts art, in particular arts and crafts also include some beautiful scenes. Many things related to the arts and crafts of Punjab are known worldwide for their quality and beauty. "Phulkari" is recognized for its intricate work, shawls in silk are traditionally designed by Punjabi. Other famous crafts of the region include lacquer work.

The taste of our culture - Punjabi Food Punjabi dishes are very popular in India due to their texture and ingredients. Both vegetarians and meat lovers are never dissatisfied here.

Butter chicken, tandoori chicken, Amritsari naan and kulcha, dal makhani, Saag, Missi roti and many more Punjabi dishes that can be eaten due to their delicious taste.

Punjabi food is very much like Punjabis - rich, full of life and full of flavour. Tandoori food is also popular in Punjab. Apart from tandoori food, the city is famous for its fish dishes such as Machha Sola, Fish Kebab, Fish Tikka, and Amritsari Fish.

Punjabi people are always known for their bread, being a state of agricultural land and wheat. Naan, Kulcha (stuffed maida bread), Tandoori roti, Rumali roti, Missi roti and parathas are well-known varieties of roti. A Punjabi-thali is never complete without lassi or buttermilk.

People of Punjab mostly cook the dish in butter or ghee. The parathas are always served with butter and are called "butter mar ke".

Many religious and seasonal festivals are celebrated in Punjab: One of the most important festivals of Punjab is the festival of Baisakhi, which is celebrated on the first day of April or May as the New Year according to the Saka calendar. It is considered to be one of the largest harvest festivals in the northwest region. On this special day, the tenth Sikh Guru, Sri Guru Gobind Singh founded the Khalsa in 1699. On this day, Sikhs go to gurdwaras and listen to kirtan. This festival is also marked as the last chance to rest before beginning the harvesting of corn. Diwali is a time of joy and hope for a bright future in this state. People of all communities participate in this festival to make it grand. In this festival, lighting the lamp symbolizes peace, health, love, and attainment of knowledge. Cattle praise and worship cattle in remote villages of the state as they are their main source of livelihood. The festival also includes the birth anniversary of Shri Guru Hargobind Ji, who was released from the prison of Gwalior Fort. This festival is celebrated by Sikhs to commemorate their gurus. There are 2 major Guruparvas held throughout the year. The first Gurparva is celebrated in the month of Kartika (October or November) to commemorate the birth of Sri Guru Nanak Dev Ji. The second Gurparva is held in the month of Pusa (December or January) to commemorate the birth of Guru Govind Singh. These days Sri Guru Granth Sahib takes out a procession in which the locals take part with great enthusiasm. The martyrdom of Guru Tegh Bahadur and Guru Arjun Dev is also observed on both days of this special festival. Religious sermons and texts are recited non-stop. The free food is known as 'Langar' is also served equally to the rich and poor. Holi is one of the most famous festivals of Punjab. The Sikh community of Punjab celebrates the 'Festival of Colors'. In the state of Punjab, the festival is popularly known as 'Hola Mohalla' and is celebrated a day after the festival of Holi. The festival also provides him with the opportunity to showcase his martial arts especially 'wrestling'. The festivals here also define Masti in various forms. The festival is held in Anandpur Sahib and is a tradition started by Guru Govind Singh in the 1700s.

Lohri is celebrated in the state of Punjab just before the day of Makar Sankranti. The festival of Lohri is very special for the community of Punjabis. On this auspicious and joyous everyone celebrates fertility and the spark of life. Religious rites and traditions are celebrated with great reverence. People join the moments by singing songs and giving their best wishes. The first Lohri of a newly married bride and newborn child is extremely important. The festival of Maghi falls exactly one day after the festival of Lohri and is very popular with the entire Sikh community. The locals go for a holy bath and give a lot to charity. Special recipes of this festival include kheer cooked in sugarcane juice. This festival commemorates the heroic battle of Chali Mukte or 40 Liberated Ones who sacrificed their lives to save the life of Guru Gobind Singh.

Sadda Pind is a great place to experience a Punjabi culture. Sadda Pind is a short form of Punjabi village. This place is successful in familiarizing you with Punjabi culture. You can see the people of the village, their language, dress, culture, and tradition with us. You can celebrate the Punjabi religious and seasonal festival with us, we celebrate every festival every year with great fanfare with Punjabi civilization. In Sadda Pind you can spend your time in peace and entertainment.