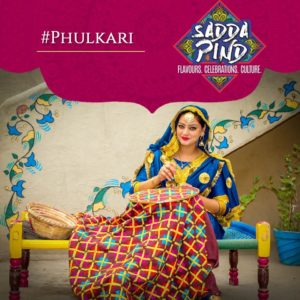 Punjab is one of the most dynamic, vibrant and culturally rich states of India, where people, especially village women, design various hand-crafts to spend their time.

The hand-made Phulkari is one of the ancient and distinct art that remains in spite of uncertainty and changing times.

The work of making Phulkari is a bit complicated as it is done with a small needle, in which brightly coloured threads are mainly red, orange, blue, green, etc. Phulkari is mainly associated with a scarf which is commonly known as "Odhni".

The Phulkari origin has not been traced. Where, Phulkari is mentioned in the famous, Punjabi folklore of Heer Ranjha (a love story) by Warrier Shah. Also, this culture has been practised since the reign of “Maharaja Ranjit Singh”.

The embroidery work is done on plain cotton fabric (khaddar), the threads of which are manually cut, loomed and dyed with natural dyes, which will be joined before or after embroidery to create the desired design. Khaddar can be of various colours, but the most popular is red (red is auspicious), and is considered a colour for youth, while white is used by mature women or widows.

Phulkari which means "work of flowers" is a rural and auspicious tradition embroidered by Punjabi women.

The embroidery on a Phulkari reveals a lot of ground cloth. A different variety of characters, forms and designs are scattered and embroidered on Phulkari.

Over time, Phulkari became increasingly elaborate and decorative, leading to the development of a special work, Bagh Phulkari.

Bagh means "flower garden", and the word separates the flower phulkari, so the embroidery is so strong that the colour of the ground is no longer visible and the embroidery itself becomes the fabric.

Unlike Phulkari, the garden demands more time and patience and more material, which increases spending. Thus, the bag became a status symbol.

Chops are usually embroidered on the borders. It is gifted to the bride by her grandmother during a ceremony before the wedding.

The "Chops" are straight embroidered with two-sided line stitching that looks identical on both sides. Unlike Phulkari and Bagh where a wide variety of colours are used, chops are usually embroidered with one colour (golden or yellow-golden).

Using their fertile imaginations, the women of Punjab developed various motifs. Inspiration is drawn from the vegetables, flowers, animals he possesses. Some of them are bitter gourd, cabbage garden, coriander garden, and Mirchi bagh. Some as Lehria Bagh are seven coloured and five colour forms, while some satranga means five colour forms while the most common and beautiful motifs are based on the stalks of wheat and barley which grow throughout Punjab. Among animals, the peacock design is the most common. New motifs have been developed as paratha, Kanchan design, booti design, etc.

Thus, expression is found in every possible representation of life and nature.

As we all know that the best Phulkari in India is found in Punjab, Phulkari is available in every nook of the state. Most people are geometricians who created this Phulkari. Women in Punjab have often seen Phulkari at weddings and other celebrations held in and around their city. In the beginning, women started it for time pass and their personal use but gradually it became a trend across the country. Even though it is considered to be just an embroidery in Punjab, it is folk art and Punjabi Tradition in the true sense.