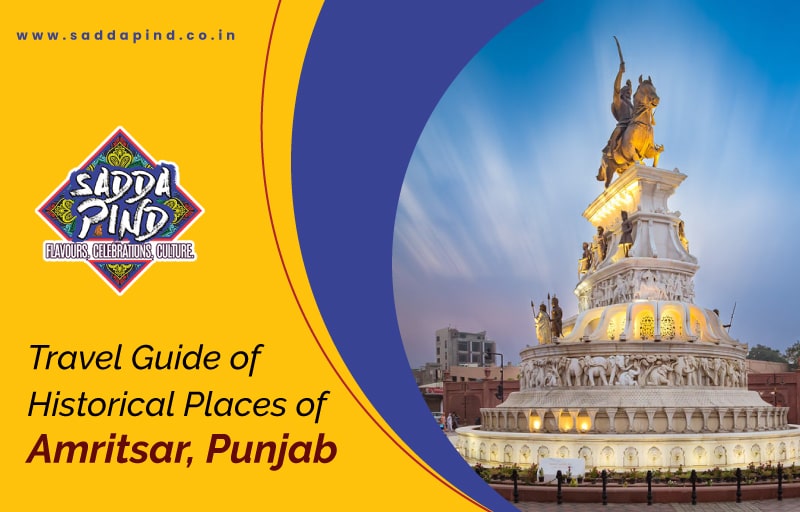 A trip to Amritsar is like a goldmine for travellers. Amritsar, the largest city in Punjab, is one of the most deeply spiritual cities in India. Thousands of Sikh devotees and tourists make daily pilgrimages to Amritsar for only one place: the famous Golden Temple. There's nothing quite like strolling through the glittering structure and sitting down with dozens of other visitors to a communal meal in the temple's huge, volunteer-run kitchen.

But as you delve deeper into this soulful, frenetic city, you will have many other fascinating experiences that will make you fall in love with Amritsar. You can venture to the Pakistan border and watch the daily Wagah Border Ceremony, taste incredible Punjabi food, stroll through the entertainment district Mandir Mata Lal Devi and visit the Summer Palace. Besides, Amritsar is a great place to buy Indian textiles.

Golden temple is the most fascinating and visited place in Amritsar, famous due to its Sarovar (artificial lake). However, this legendary religious shrine is a tourist attraction and one of the holiest places in the world for Sikhs, many of whom make a pilgrimage to this place.

Walking into the glittering sanctum of the temple, where priests sing songs from the sacred text Guru Granth Sahib, is just one of the many options offered by Golden Temple. It's fascinating to see volunteers chopping onions, peeling garlic, and cooking lentils & roti for up to 100,000 guests a day.

A 31-kilometre drive west from Amritsar city centre brings you to the Pakistan border, where a curious border-closing ceremony takes place every afternoon at sunset. Loaded with grandeur and condition, the Beating Retreat Ceremony includes a flashy presentation of gatekeepers from the Indian Border Security Force and the Pakistan Rangers, saluting one another, bringing down and collapsing their banners shutting the entryways at the boundary.

On the Pakistani side, men and women sit separately in stadium-like rows of seats, and the atmosphere is much more subdued. On the Indian side, however, people celebrate the moment like a party. Bollywood music blares from the loudspeakers, women dance in the street, and they wave Indian flags in the stands.

The year 1947 was an important year for India. It was the year India gained its independence from Britain. The year is split into the two distinct entities of India and Pakistan - an event known as the Partition of India.

Tourists in Amritsar can learn about this pivotal moment in history at the Partition Museum, the world's only institution devoted exclusively to the partition. It displays a haunting collection of newspaper clippings, old photographs, and oral narratives of people who witnessed the violence leading up to the partition of the two countries and the resettlement of refugees after the event. The experience will give you a deeper understanding of the origins of the rivalry between India and Pakistan. This is one of the heritage places in Punjab.

The Mandir Mata Lal Devi is one of the most spiritual and elegant places. Rumours have spread far and wide, suggesting that this Hindu sanctuary, devoted to the female holy person Lal Devi, can expand ladies fruitfulness. For non-believers, however, the labyrinthine attraction resembles an amusement park.

Jallianwala Bagh is located near Golden temple on heritage street. The public garden commemorates the estimated 1,500 people killed or injured when British soldiers were ordered to fire on peaceful protesters demanding the release of imprisoned Indian Independence Movement leaders in 1919. You can still see bullet holes in the walls behind which hundreds of victims hid to escape the shelling.

In the Martyrs' Gallery of the memorial, the portraits of important personalities of Indian independence are displayed. You can also visit an exhibition on the victims and see an eternal flame.

Regularly dominated by the adjoining Golden Temple, Baba Atal Tower is a beneficial fascination in Amritsar by its own doing. The construction is an engineering wonder with nine octagonal stories stacked 40 meters high, making it perhaps the tallest design in Amritsar.

Baba Atal Tower is dedicated to Atal Rai, the child of a Sikh Guru. As indicated by legend, Atal Rai played out the supernatural occurrence of bringing somebody resurrected and afterwards surrendered his life to make up for the wrongdoing of meddling with God's work. The perspectives from the highest point of the pinnacle are probably one of the historical places of Amritsar.

If you take a look at Shri Durgiana Mandir (Durgiana Temple), you might think you see double. With its half-gold, half-marble facade, the domed structure looks almost exactly like the Golden Temple - it's even in the middle of a sacred lake.

Even though the two temples are hardly different on the outside, they've different purposes. Durgiana Temple is a Hindu site where admirers honour the hero goddess Durga, the success goddess Laksmi and Vishnu, the universe's defender. Religious travellers mostly visit the attraction, but ordinary tourists will also appreciate the splendour of the marble inlay work and the spiritual atmosphere of the temple.

As you make your way inside the temple, look out for the exquisite silver doors depicting sacred figures. This feature is the reason for the nickname Durgiana Temple Silver Temple. This is one of the most beautiful historical places in Punjab, India.

Architecture lovers should visit Khalsa College at Grand Trunk Road in Amritsar. The historic educational institution is a fantastic example of the Indian and Persian style interior.

With its elegant onion domes and sweeping archways, the stately main building of Khalsa College is impressive and has served as the backdrop for numerous Bollywood films. Stroll around the tranquil campus and gardens, but remember that the academic and administrative buildings are reserved for students and staff only - this is a working college, after all.

Sadda Pind reflects authentic village life in Punjab, India. Look forward to sculptures of men and women performing everyday tasks such as weaving, sewing, fetching water and dancing. In the evenings, you can enjoy live dance performances like bhangra and magic shows. Besides, this place also offers activities like camel riding and horse riding. This majestic place will surely grab your attention with its various activities and the essence of Punjab's villages. Also, you can enjoy the authentic Punjabi food here to satisfy our taste buds. It is the best Tourist Destination in Punjab.

Whether you want to peek into Amritsar's incredible past or enjoy the present, a visit to the city will leave you with an enriching experience. So make your way to the city, explore the historical places of Amritsar and start your happy tourist adventures in this amazing land of heritage and culture.